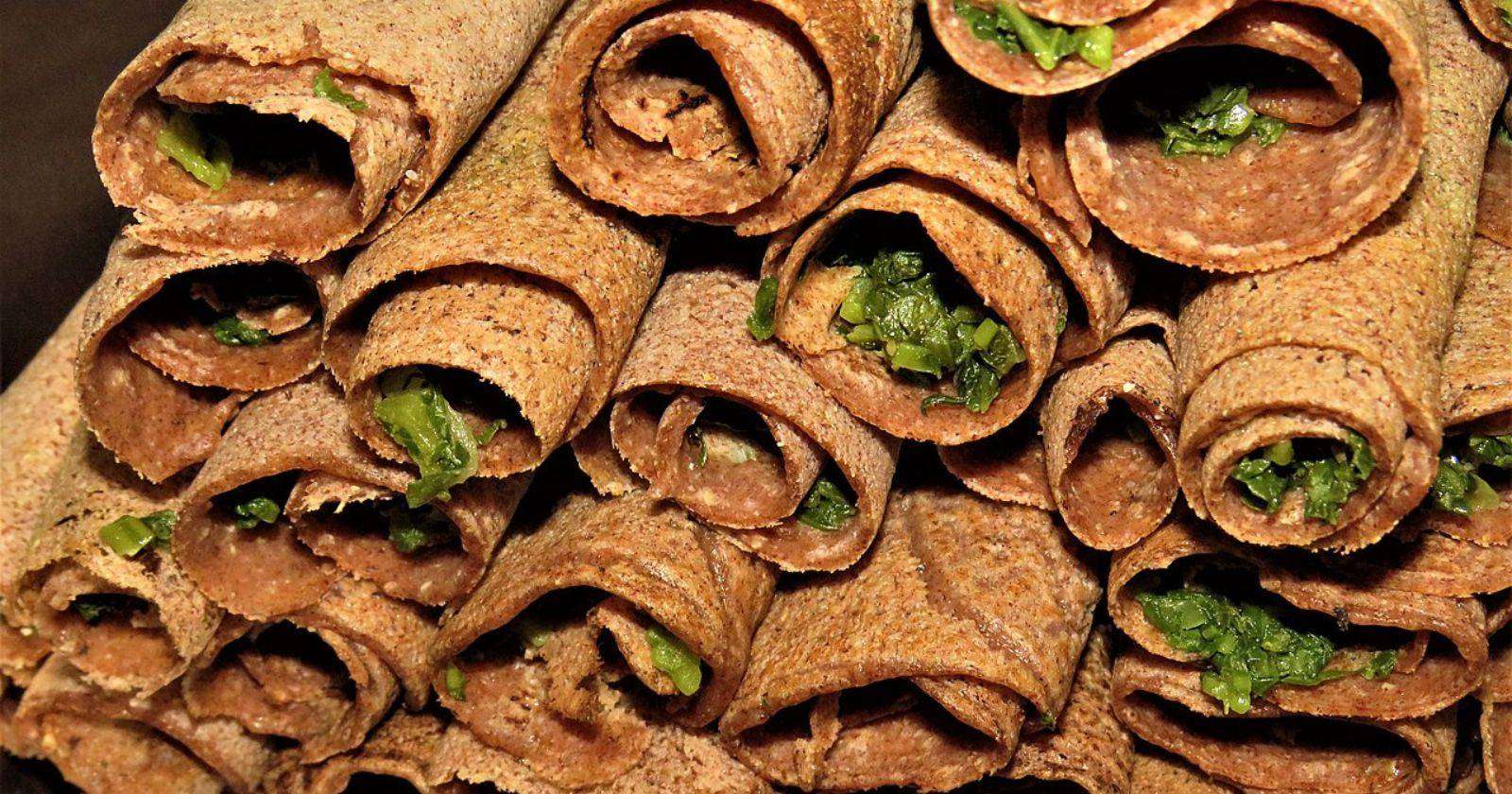 Sikkim is a tea-grown state in India. The Sikkim team has a special place in the Tea market.

What are the Famous food of items of Sikkim

Sikkim cuisine provides many mouthwatering & delicious food ranges. Here we have listed 19 famous food of Sikkim, Most of the dishes are easily available in local restaurants or eateries.

This is a pork dish, one of the famous food in Sikkim. Radish & red chillies are used to prepare the pork fat. Most famous pork dish in Sikkim. With some vegetables, this dish is prepared with No oil. You will find this dish spicy & a little tangy in flavour.

Another dish from Nepal cuisine. Dhindo dish is made of buckwheat, ground millet, or cornflour. When we cooked it with boiling water, it formed a sticky Paste.

Small Balls are made with paste & these Balls are dipped into soup or chutney. It is a famous food of Sikkim.

Kinema is Sikkim food prepared from Soya beans. As you know, Soya beans are a great source of protein, so this dish too. These beans are boiled than fermented.

This curry dish is prepared with turmeric powder, onion, and other spices. This is one of the unique soya dishes.

Gundruk & Sinki is a fermented dish. It works as a food appetizer. Gundruk is prepared with leafy vegetables. Then dried in the sun & packed in the jar. Fermentation starts after 2-3 days. In the case of Sinki instead of leaf vegetable reddish, cauliflower is used.

Sha Phlaey Popular Sikkim food is from Tibetan cuisine. This dish is made with beef. This is Cooked with Ground beef, vegetable & spices stuffed in bread or pastry. Semi-circle in shape deep-fried, the dish is quite popular in Sikkim.

It is also Popularly Known as a chimney soup. The reason is that this food is served in a chimney-shaped bowl. This mouth-licking Non-veg soup is prepared with Meat & vegetables. This is also Tibetan food.

Are you fond of Non-Vegetarian Noodle soup? This is for you. Made with vegetable wheat flour & meat. It served as dinner in Sikkim. Spicy in taste is easily available in any restaurant in Sikkim. This dish is inspired by Tibetan cuisine. Tibetan & Nepal cuisine has a higher influence on Sikkim food and culture.

Sael Roti is popular fried in Sikkim, Nepal & Tibetan. Roti paste is prepared with rice & water. Then it is deep-fried. This dish gives you new flavour to your taste buds.

Makaio Ka Jaanr is a Homemade Alcoholic Beer from Sikkim. This Beer is Made with the Fermentation of Rice. This beer is not Distillate. Distillation is Done for Strong Alcoholic Beer.

This Local beer is Made with Makai (Corn). A Special Kind of Yeast that is available in Local forests is used for fermentation. This local yeast in Sikkim is called Marcha. Organic Beer is very popular in the local market.

The shelf life of this Beer is not very long. This beer is not officially allowed to sell in the market. you will find other variations in this Beer. “Kodo ka Jaanr” is Made of Finger Millet and “Bhati ka Janr” prepared with “Rice” and another one is the “Gehun ka jaanr” made of “Wheat”.

Alcoholic beverage is used when people socialize with near one and dear one.

One of the most popular Curry dishes from Sikkim Cuisine. This food is also very popular in Nepal. Mostly consumed by the Newar of the Nepalis. This is quite similar to Punjabi wari / Wadi.

The Main Ingredient that makes this dish special & delicious is Fermented Black gram. Food is Made with Fermented black Gram and Some other spices. Black gram is also known as Urad dal. This food is eaten with hot steamed rice.

Kodo is finger millet. That is very popular in Sikkim Food culture. It is also a famous recipe in Nepal. A Sweet Roti is Prepared with the Finger Millet Flour. Sugar is used for sweetness. People eat this Roti or Flat Bread with Various Kind of Pickles or Tomato Chutney. Applying Ghee to this Roti Makes it more delicious. Kodo is also Known as Raagi. Raagi is also consumed in South India.

Achar is a Hindi word for Pickle and Shimi is a string bean or Green bean. A special Pickle of Beans from Sikkim cuisine. This dish is the famous food of Sikkim. Achar is prepared with Shimi and Other spices. After cutting the beans into small pieces and boiling,

A paste of Sesame seeds is used in this pickle with green chillies and other spices. This Pickle is very common in regular food habits in Sikkim. But it gives you an amazing taste with the combination of sael roti.

Khuri is the traditional dish of Sikkim. This authentic dish is made with buckwheat crêpes with Vegetables or meat. This Food is Mostly Popular in Lepcha Community. It is one of the healthiest food in Sikkim Cuisine. It is prepared with buckwheat and millet flour.

Khuri is a Crêpe having the stuff of leafy mustard, Local cottage cheese, and other local spices or herbs. Khuri is eaten with a special kind of sauce. This spicy sauce is made with cherry pepper and ground walnuts /perilla.

Dal Bhaat is Very simple in Sikkim, but people are very fond of this food in the state. Dal is Lentil’s curry and Bhat is steamed rice. This food is eaten in almost every home in India.

Dal Bhaat is one of the best dishes. It is Indian Vegan food. Dal is a great source of Protein. The addition of Ghee makes this food more delicious & tastier.

This is a traditional food of Sikkim. It is prepared with a special kind of Cottage Cheese that is Known as Chhurpi. Chhurpi is Locally made cheese, Made of Milk of cow or Yalk.

This cheese is very popular in Sikkim, Ladakh, Nepal, and Tibet. Chhurpi cheese is a bit different in taste and texture as compared to Normal Cheese available in the market.

This white, unique cheese is a little sour in taste. Chhurpi soup is quick and very easy to make. Onion is golden fried with Paanch Phoran masala. Other ingredients are Tomatoes, ginger, and salt and a Special ingredient of the dish Chhurpi is added later on. This Soup is served hot with Steamed Rice.

If you are a tea lover, you must try Sikkim Tea. Hope you know Sikkim is one of the states of the country where tea farming is done.

Sikkim’s tea is popular in the tea industry for its Kind variety of Tea. Tea grown in Sikkim is Popularly named Sikkim Tea. It is organic tea and sold in the market as “Tami tea”. After Darjeeling tea, Sikkim tea is about to get a GI tag.

Another dish is based on the Chhurpi. This is a Famous household dish in Sikkim. Very simple and easy to cook the dish. Chhurpi (local Cottage cheese) is prepared with Niguru. Niguru is a Kind of fiddle fern. Which is found in Jungle. To enjoy this food you have to visit any local household.

Wahcipa is a Unique dish from Sikkim cuisine. This food is available in Both Veg and Non-veg Variation. The non-veg version of this dish food is made of rice, chicken minced, and Powder of Burnt feathers Chicken. You will find bitterness in the taste. Similarly, the Veg version of This dish is made of Special flowers. Those flowers belong to Plant Damlapa.

Sikkim cuisine gets influenced by the cuisine of Bhutan, Tibet, and Nepal. which are their Neighbours. dishes made of Bamboo shoots and mushrooms.

Locals love to grow their own vegetables & fruits. In other words, they consumed organic food more. This made Sikkim India’s first organic state.